A downloadable game for Windows, macOS, and Linux

Intra-System: Trust Issues is a short minimalistic Audio-Adventure based on decisions.

You co-operate with a system to communicate with an unknown person.

He communicates with you per voice messages and asks for advice as he passes through different rooms.

Are you a nice person and willing to help him?

Every playthrough of this audio-adventure takes about 15 minutes to complete.
Your decisions have a great impact on the game and make every run unique.

"After he screamed with all the intensity of a hyena caught in a bear trap, I resolved to help him out." - Brendan Caldwell, Rock Paper Shotgun

"Figuring out the interface is not rocket science, but finding answers is." - Joel Goodwin, Electron Dance

This is our first project at SmokeSomeFrogs and we've been working on it since July 2016.

System Requirements: Works on your toaster. Recommended is an Intel Celeron J3060 (Dual Core 1,6 GHz), its iGPU (HD 400) and 2 GB RAM but it should perform well even on much older systems.

Daniel da Silva is currently working on Sonucido: The Mage!

In order to download this game you must purchase it at or above the minimum price of $3 USD. You will get access to the following files:

I had a lot of fun playing this game! Unfortunatley didn't find all the hidden stuff in the game...

I've played this game for about 3 hours, trying to get every ending and exhausting nearly all dialogue. I have not a SINGLE idea what the hint is for the secret ending, or where to even find it.
Is it during the gameplay and dialogue related? Is it related to the "clues" we find during the game (even though we can never bring anything from them up during the gameplay)? Is it related to the "game resetting" thing in the settings menu?
I don't have a single idea and it's very upsetting. If I didn't know from this page that there even IS a secret ending, there is a 0% chance that I would even begin to think there is one.

The game is very fun! I quite enjoyed playing through it multiple times, being nice or being mean, finding out what actions does what and gather clues.
Sadly I'm left with as many questions at the end of the game as I started the game with. I don't think I understand a single thing about what is happening, where it's happening, or why it's happening. I don't know if the secret ending explains anything, but even if it did, it would've been nice to know at least /something/ by just playing through it normally.

On that note, it is very annoying to have to go through the same dialogue over and over with no way to skip the voicelines, when you're playing the game multiple times to find the secrets. It would be great to be able to skip the agent's voicelines, to make it easier/faster to play through it fifty times trying to find the secret ending.
I think that's where most of my 3 hours of playtime even came from haha

All in all, I did really really like this game, and I had a lot of fun the first couple of playthroughs! It made me laugh a lot to make the agent angry at me haha

I won't play it anymore to find the secret ending without having at least a BIT of a clue on where to even find the hint. Making a hint so hard to find is just... not great.
Or maybe I'm incredibly stupid but well.

Hey, thanks a lot for your in-depth comment on the game, I really enjoy reading thoughts especially about Intra-System since it was my first bigger game I helped to make. :D

I know it can be frustrating to search for the secret ending but I deliberately stopped speaking about secrets in games of mine after some information which I told in a private conversation were leaked. But I leak a small easter egg for you because you clearly put a lot of effort into it. If you click ten times or so on the big play button in the main menu there might be a message.

Regarding the meaning: I don't want to say if it is true or not but I really liked the interpretation of Joel Goodwin http://www.electrondance.com/the-lever/

I always disagreed with a skipping feature - I think the problem is mostly that the game isn't wide enough if that makes sense (more things like the broken lever, a few special events, more broad pathing and some other stuff), so that the repetition would be reduced or be a bit more spaced out - adding a skip-button would certainly be easier but I think there is a better (albeit harder) way to make it less tedious.

I just can't figure out the secret ending, is there a way I can privately message you, or any hints you can give? I can't think of anything else to try

Hey, sorry, I don't want to spoil it! It's hard to find but there is a hint in the game itself.

I guess I'm the one with trust issues, but why does the application (windows) requires admin permission to make changes to my computer?  Most games don't require that sort of thing, so I can't play this one due to paranoia now.

Because it has an installer. It doesn't require admin permission afaik, just the permission to make changes. I get this message everytime I'm installing a game from GOG for example. Many games nowadays start without installing these days, that's likely why you don't get the message often on Itch.

You can try out Flufftopia, it's also made by us and part of the bundle and doesn't have an installer :D

I love Flufftopia, thank you.  Also I didn't realize the game required an installer, thank you for letting me know.

Hi, I'm attempting to play on my Mac, and whenever I try to change to full screen or change the screen resolution in Settings, the game immediately crashes. I'm playing on the jar.

oh that's unfortunate to hear. Alas, I don't know how to fix it and we never had a Mac to test the game on. The jar is more of an unofficial extra for everyone who wants to try. Sorry!

Alright so...for the secret ending, any hints you could give?

There's a hint in the game but I don't want to give more hints! I hope you like the game :D

Ah, alright.  Just been struggling to...well, figure out the hint.

Reply
A Friendly Irin2 years ago

I've played through 5 times, but I can't tell if there's any other ending. I've only gotten the ending where he says "What are you?", the one where he says "I'll help you," and the deaths by toxic gas and mannequin. There doesn't seem to be any way to get him to keep the generator active, even if I'm being completely helpful.

Am I missing something?

Hey, no this is the end - the game isn't really longer. Although there is a secret ending, but on normal play this is the furthest you get into the game. I hope you liked it :) 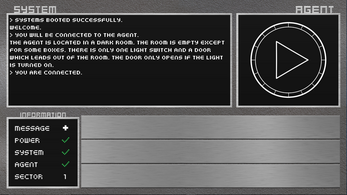 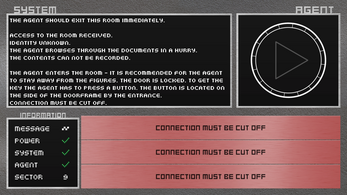 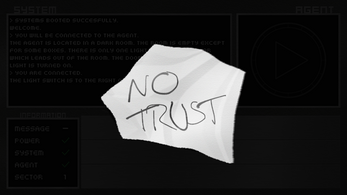 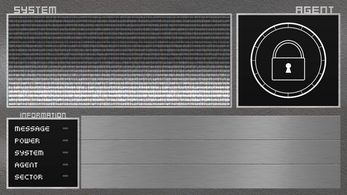